This paper offers a derivational account of [jɛ], and establishes the motivation for vowel doubling before [jɛ] in some past and perfect verb stems in Asante Twi. The paper identifies ‘avoidance of an independent high vowel syllable’ as the prosodic condition that motivates the formation of the VVjɛ subunit in these verb stems. What begins as an attempt to, optionally, resolve a violation of this prosodic condition at the stem final position results in a violation of it stem-medially. A vowel is doubled to avert the violation of this condition at the stem medial position. Vowel doubling feeds the phonological processes that derive the jɛ subunit of these verb stems. There is alternation in verb stems; the forms with ...VVjɛ ending is one of three different permissible outputs in Asante Twi. A constraint-based account identifies four free ranking constraints as responsible for the alternation in these verb stems. These constraints organize into three subhierarchies that select the three different output forms of a verb stem. Interaction among the four constraints within the three subhierarchies is guided by the ranking schemas: Markedness constraints >> Faithfulness constraints, Faithfulness constraints >> Markedness constraints and Segmental/featural constraints >> Prosodic constraints. The arrangement of these constraints into the first schema selects a verb stem with the …VVjɛ ending over the other permissible outputs.[1] Keywords: past, perfect, suffix, doubling, constraints

[1] The Department of Linguistics at Legon assigned me to Professor Florence Abena Dolphyne as my thesis advisor in the year 1999. We had a very good working relationship. I found her to be very approachable, respectful of me and my ideas, and very generous. She was a good advisor for the work I was doing, and I knew that she wanted me to succeed in my studies. I think she went beyond the call of duty for the period I worked with her. She introduced me to the teaching of the Akan (Twi) language to foreign students on this campus, and generously gave me a copy of her Twi book which I used to teach the language to this foreign student. She was there for me, and I am very happy to be able to join with the rest of my colleagues in linguistics to honor her with this publication on her 80th birthday. 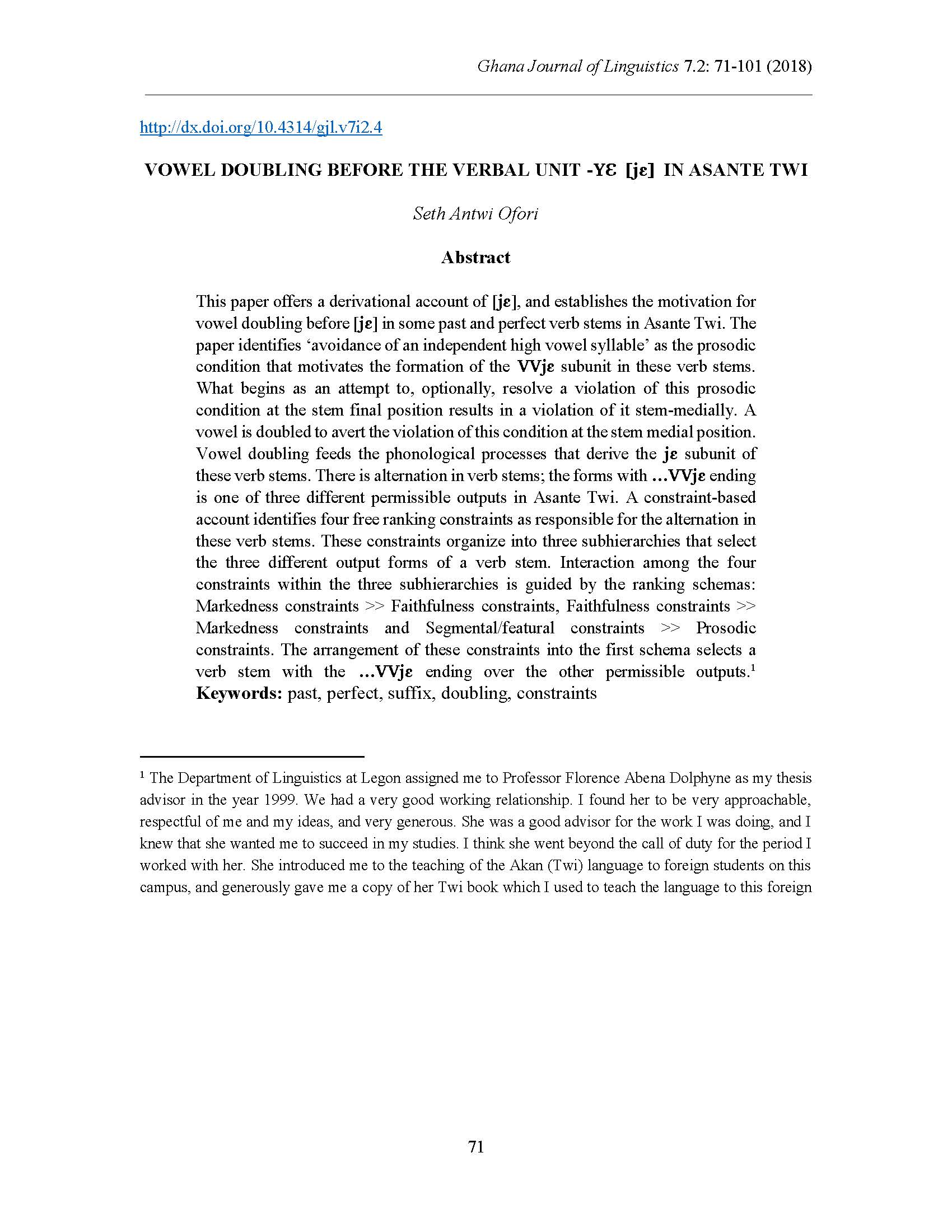