This paper examines the morphophonological processes in the derivation of some female family-names in Akan, a Niger-Congo (Kwa) language through the addition of a male source name and the female morpheme /-baa/. About three main kinds of family-names can be identified in Akan: (i) those usually given to females only, (ii) those gender-neutral, and (iii) those given to males but out of which female counterpart names can be derived. The current paper examines the third type and claims that even though different realizations of the female morpheme are observed, namely [-wa(a)], [-ma(a)], and [-a] to attach to the male source names, there is only one morpheme in the underlying presentation, that is, /-baa/, /-bea/, and /-ba/ for the Asante, Akuapem, and Fante dialects respectively, out of which these three variants are derived. This underlying morpheme manifests differently among the major dialects, which could be one of the points of distinction among them. To account for its different cross-dialectal realizations, it is shown in this paper that the underlying morpheme-initial consonant /-b/ specified for [+consonantal, +labial, −continuant] may acquire nasality at the surface level as in [-maa] through nasal place assimilation. The same consonant may lenite to labial glide [w] intervocalically and surfaces as [-waa]; or may even elide completely in the same context and be realized as [-a]; the underlying segment is systematically neutralized in the Asante dialect. In the Akuapem dialect, on the other hand, this underlying morpheme-initial segment is invariably fully preserved at the surface representation. The case of the Fante dialect resides in the middle of the continuum; i.e. it is non-systematic. The initial segment may or may not be preserved within the same contexts. Based on these observed variations it is concluded that while the other two dialects, especially the Akuapem, can preserve both the place and stricture features values of the underlying morpheme-initial /-b/ of the female morpheme, the Asante dialect only preserves the value for the former, and systematically neutralizes that of the latter. This observation is formalized within the Optimality Theory.

Kwasi Adomako is a Senior Lecturer in the Department of Akan-Nzema, University of Education, Winneba. He is currently a PhD Linguistics candidate at the University of Ghana, Legon.  His research focuses on the phonology; both segmental and prosodic properties, of the loanword phenomenon among some members of the Kwa language family spoken in Ghana. He is also interested in the morphophonological study of some phenomena such as personal names, language games, reduplication, etc. His other areas of research interest include language use in the Ghanaian media. 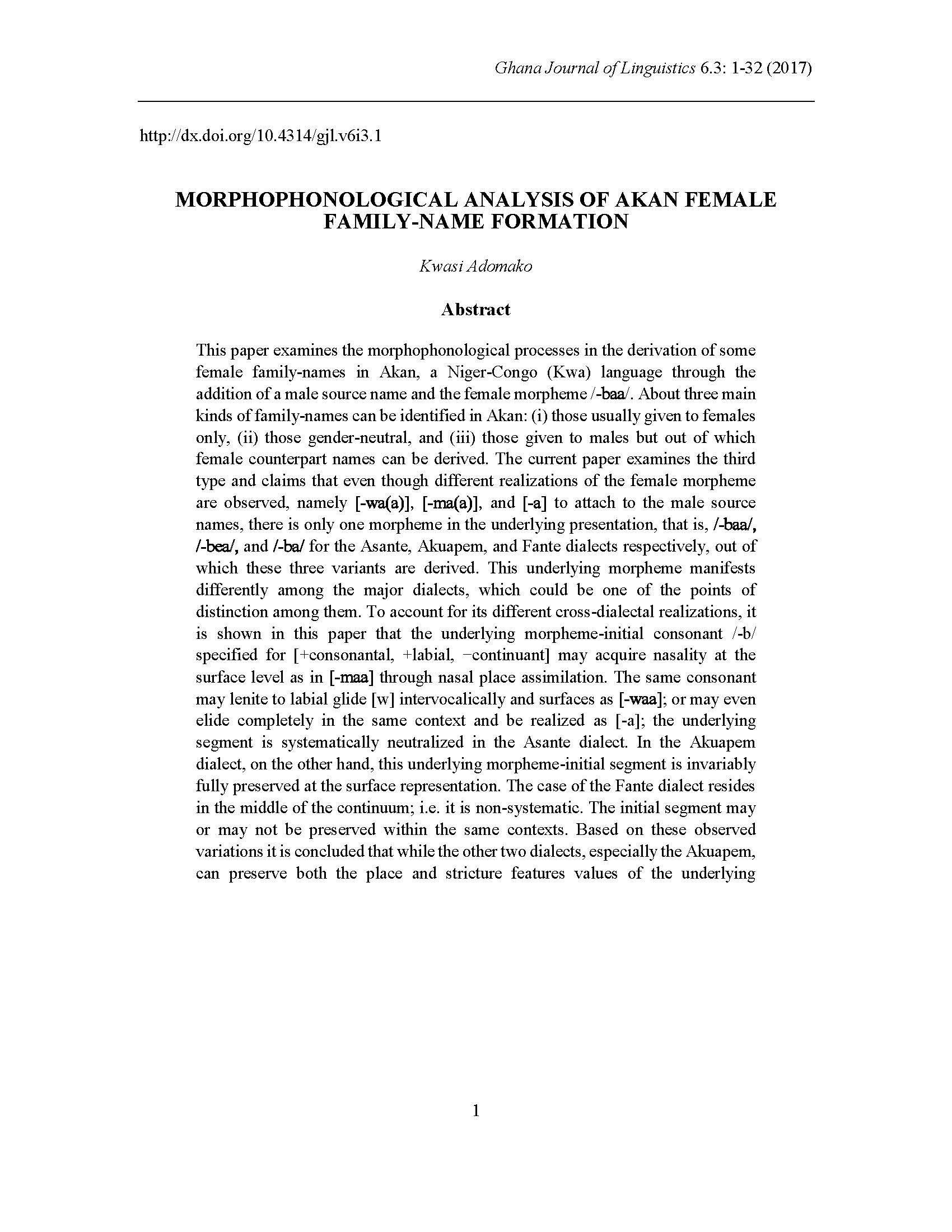