This paper offers a description of the nominal class system in Esahie (Central-Tano, Kwa, Niger-Congo). It contends that, though the noun class system of Esahie per se is morpho-syntactically vestigial, hence differing from other African languages (e.g. most Bantu languages) where noun classes can be assimilated with GENDER, in Esahie, NUMBER, as a syntactic feature, triggers agreement, rendering the class system in Esahie a number-based one. On morpho-syntactic grounds, six distinctive noun form classes are established for Esahie. This paper also provides an account of how morpho-phonological information influences the noun form classes of Esahie. As argued for Akan (cf. Bodomo and Marfo 2006), morpho-phonological information is equally relevant for understanding the choice of one number affix over the other in Esahie. The present work presents yet another piece of evidence in support of the view (cf. Ameka and Dakubu 2008, Aboh and Essegbey 2010, and Güldemann and Fiedler 2017) that unlike the Ghana-Togo-Mountain languages, which have been attested to have a functional class system, the Central-Tano languages, to which Esahie pertains, have a relatively fairly decayed and less-conservative inflectional system. Comparing Esahie to Akan, however, data discussed in this paper seems to suggest, prima facie, that Esahie has suffered a relatively stronger deal of morpho-syntactic decay in the inflectional system of the nominal domain. Data used in this work is collected largely through elicitation from native speakers.

Obed Nii Broohm is a final-year PhD student at the University of Verona, Italy. He obtained his BA and MPhil degrees in Linguistics from the University of Ghana. His research interest lies within the nominal morpho-syntax of Kwa languages, with particular interest in Esahie (alternatively referred to as: Sefwi, Asahyue, Samvi), a relatively understudied language. Obed’s current (PhD) research delves into both the inflectional and word formation system of the nominal domain in Esahie, with particular interest in issues including nominalization and compounding, and their interplay in some word formation phenomena. Prior to this, he worked on Information Structure in Kwa, with specific emphasis on Esahie. 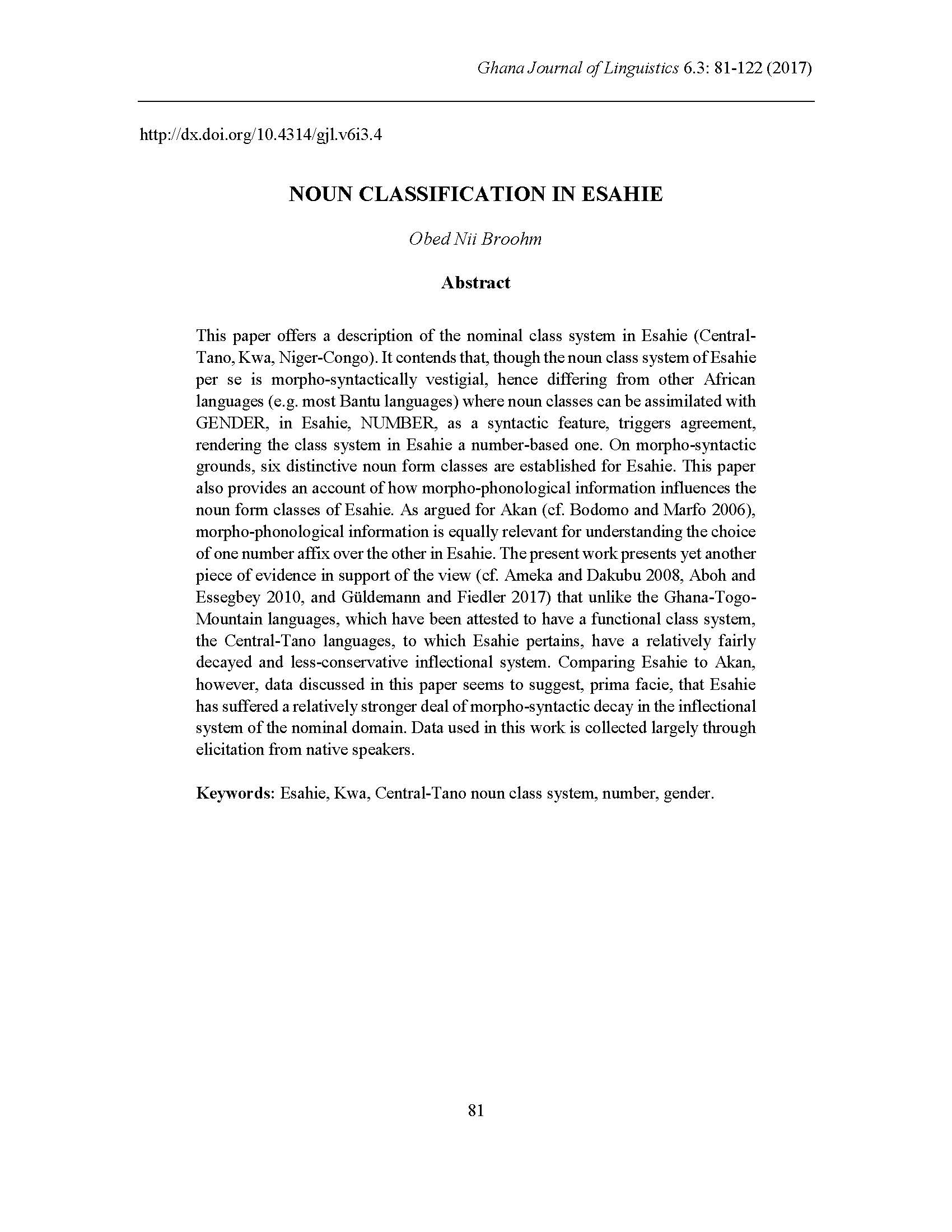